Why get the Kraftwerk Press?

Look at German typography of the “Roaring Twenties,” and you’ll likely find a feverish, chaotic striving for “Modernity,” each specimen in its own way. This shouldn’t surprise us: Beaux Arts and Art Nouveau had all but perished in the trenches of the Great War. What style would replace them was anyone’s guess. Dadaism had produced a few early spasms, hardly noticed by the mainstream. Art Deco was rising in the West, Constructivism in the East, the Bauhaus, so hallowed in later years, was somewhat of a prophet in his own country – and so much type was left over from before the war! For much of the decade, Germany remained a melting pot of styles, old and new; a petri dish where traditionalism and avant garde clashed and mingled gaily in innumerable experiments. The fonts of the Kraftwerk Press cut across this hodgepodge, from the decidedly stark, fat, and dirty, to the refined, and even whimsical. Our hope and intention is that these fonts lead you to original designs that breathe - but don’t ape - the same exuberant spirit that pervaded the art almost a century ago. Get the Kraftwerk Press now, then go forth and experiment, and make this look your own! 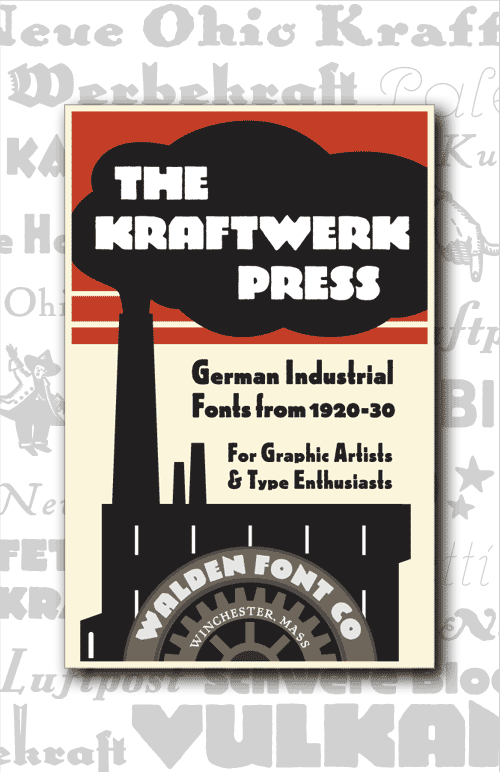 The Kraftwerk Press is a collection of revival and original German typefaces from 1920-1930. They range from gritty industrial to rustic and sophisticated. Use them in any project that needs an unusual retro look.
All outlines have been redrawn for improved quality; all fonts feature complete Western Latin character sets. Stylistic Sets expand the range of available characters. The symbol fonts contain a large number of useful period images. You get:

All fonts are in OpenType format, suitable for Windows and Macintosh.